The cute and petite Yorkshire Terrier is among the most adorable pets. Energetic, brave, and determined, Yorkies carry an impression of big personality despite their small physique. Their silky coats make them the chosen symbol of the high society despite his working class origin.

Origin and Name of Yorkshire Terrier

The Yorkshire Terrier traces its origin to different types of Terriers, an active and fearless breed of hunting dogs. During the 19th century, large-scale Scottish migrants came to England in search for work at Lancashire’s cotton factories and settled around Yorkshire. Various Scottish Terrier dogs accompanied these men to England. A new breed of small dogs came into existence as a result of the crossbreeding between these Scotch Terriers and local English dogs, and it was named as the Yorkshire Terrier.

For years, Yorkies were employed to hunt rodents in factories and mines. The turning point for this small breed of dogs came in the late 1860s. A Yorkie named Huddersfield Ben won numerous dog shows and awards in the United Kingdom, finally drawing popular attention toward Yorkshire Terriers. Soon, the European high society adopted the dog and its silky coat became synonymous with the rich.

Yorkies came to the United States in 1872 as part of the Victorian era symbolism. However, the breed saw a rise in the popularity only after the exploits of Smoky, a Yorkshire Terrier, in the World War II caught the nation’s imagination. This rekindled public interest in these dogs while making Yorkies a popular choice.

Appearance and Coat of Yorkshire Terrier

Yorkies are small and recognized for their long, silky hairs. A Yorkshire Terrier weighs less than 7 pounds while it has a maximum average height of 8 inches. Most dogs of the breed weigh between 4 and 6 pounds.

The body of Yorkshire Terriers is well proportioned with the long, high-glossy hair. Yorkies are adored for their exotic coat color and texture. Puppies normally have a black coat with tan points. However, the coat turns into steel blue, light brown, or gold as they mature. There may be tan on the legs below the elbow.

The hairs over the face of a Yorkie are long and have golden hues. At the base of his ears, tail, and on the muzzle, Yorkies have darker hair. They have a flat head dotted with a medium muzzle and black, button nose.

Many pet stores sell “teacup” Yorkies, smaller than the normal appearance. These dogs may have hereditary disorders.

Contrary to common perception, Yorkies are not purse dogs. Though small in size, they have a big personality. They are intelligent, courageous, self-assured, highly independent, and energetic. Highly adaptable, a Yorkie requires very less exercise.

The Yorkshire Terrier boasts an adventurous spirit. Smart and active, a Yorkie loves attention and is overprotective. He loves to assert his presence and often exhibits temperament akin to big dogs. Yorkies often turn very aggressive and do not hesitate to fight with bigger dogs. Their personality and attitude make them a perfect companion for old people yet unsuitable for young children.

Yorkies are known for being stubborn dogs. This is part of their independent attitude. You may see them behaving badly or showing aggression when not socialized properly.

With discipline and training, Yorkies can be unrivaled show dogs. However, their stubbornness often makes training difficult. Even housetraining requires patience and perseverance. While some Yorkies readily adhere to the training, others just refuse to follow.

The Yorkshire Terrier tends to bark a lot and owners must pay special attention to curb its barking behavior.

These dogs are vulnerable to different inherited, congenital, or acquired health problems. Yorkshire Terriers are born with abnormalities, such as hip joint problems, because of hereditary factors. Hypoglycemia or low-blood sugar often impacts Yorkie puppies. Liver disease is prominent in many adults.

The exotic coat of Yorkshire Terriers faces threat from various allergy triggers, such as pollution, chemicals, plants, and fleas. Retinal dysplasia in Yorkies traced to genetic factors often leads to vision problems and may eventually cause blindness.

A  Yorkshire Terrier may inherit genetic abnormalities from his parents. A liver shunt is a genetic disorder in the breed. This inhibits liver function and enhances the risk of toxicity in the dog’s body. 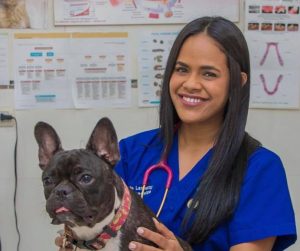 I’m Marcelle Landestoy, DVM, and I heal pets for a living! I’m the director of the UCE Veterinary Hospital and the UCE School of Veterinary Medicine. I am a general veterinarian with a Small Animal Medicine Specialty, certified by the International Veterinary Acupuncture Society (IVAS) and I created this website to help you keep your pets healthy and happy.

Popular
Next »
Latest
Next »